Unique Doberman Pinscher Puppies for sale require daily mental and physical stimulation and exercise and we will not place our Doberman puppies in homes where people are out at work all day and think it's fine to leave one of our puppies locked in a crate all but a few hours in the evening when they return home from work.
​If you have the time and experience for one of these gorgeous Doberman babies, please email or telephone my mobile number. 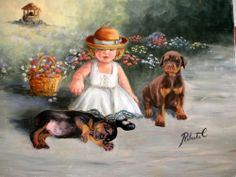 Campbell's Test.
One can predict a Doberman puppy's temperament by using the Campbell's test if the pup is not more than 6 to 8 weeks of age. William Campbell developed a test for evaluation of the future temperament of a dog this test will help you to make a judgment about the puppy's aptitude. The test was tried for eight years on more than ten thousand of canines of different breeds.
Basic rules: You have to be alone with the pup. When you choose an environment for the test, choose a calm area to avoid disturbances. Don't talk to the puppy, don't pet him. This test should be performed only once. Each subtest lasts about 30 seconds.
1. Test his Trust
Set the pup on the ground and walk away from him, a few steps. Then kneel and clap your hands several times. Pay attention of how the puppy reacts to the clapping. See if he comes to you, tail, high or low. The puppy will show you right away the level of trust he has placed upon you. Note the result.
A. Comes easily, tail high, hopping and nibbling hands
B. Comes easily, tail high, while yelping toward your hands
C. Comes easily, but with the tail lowered
D. Comes hesitantly
E. Does not come at all 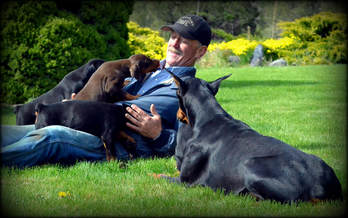 3. Restraining test
Flatten the puppy and roll him on his back. Hold a hand upon its sternum for at least thirty seconds. His attitude should tell you whether he is accepting or refusing this physical domination. Note the result.
A. Struggles vigorously, wants to get away, bites
B. Struggles vigorously, wants to get away
C. Struggles a moment, but surrenders
D. Does not struggle, licks hands
E. Lays still, very frightened 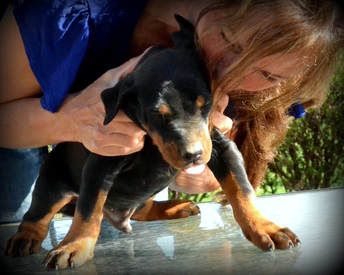 ​4. Social dominance test
Again, flatten the puppy against the ground. Stroke him, from head to back, a few times. A dominant dog will resist such fondling; he will even try to bite you. An independent puppy will go away. You may repeat this test many times. Note the result.
A. Jumps, yelps, scratching, bites, growls
B. Jumps, yelps
C. Squirms, licks hands
D. Welters, licks hands
E. Gets away, does not budge 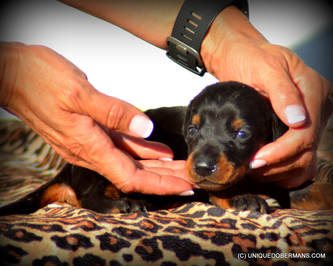 5. Lifting test
Raise the dog, hands across the puppy's belly. Hold him at a reasonable level. At this point, the puppy has lost all control. The way he reacts will tell you how submissive he his. Note the result.
A. Ferocious, bites, growls, cries
B. Kicks a lot, cries
C. Struggles, soothes himself, licks
D. Does not struggle, hanging or licking hands
E. Noticeably frightened 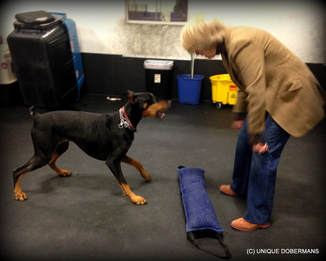 Test Results
2 A's or More, with B's:   This Doberman is a leader and will try to dominate. He can be aggressive and can bite if mishandled. Not recommended for babies and elderly persons. Excellent watchdog if trained by an experienced trainer with calmness and gentleness.
3 B's or More:    This Doberman is calm and confident with a tendency to dominate. Strong aptitude for training; Will be good for obedience competition in IPO or agility. If trained, this Doberman will become a great and obedient friend. You will find him equally great in the crowd or on the sofa.
3 C's or More:    Excellent family dog. Perfect for children and elderly persons. No major problems. Might be less capable to serve as a protection dog.
2 D's or More, Especially if combined with E's:   Puppy is submissive. Has a great need of love and tenderness. Will be good for family with children, though can bite if treated badly.
2 E's or More, including one in the D Test:   Has a hard time socializing. Can attack due to fear, stress, especially if punished. Not recommended for families with children and elderly.
A and E's mixed:    Start over the test elsewhere. If the result is the same, the puppy is unpredictable. 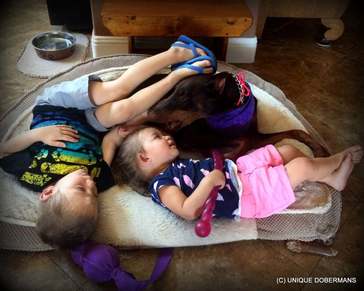 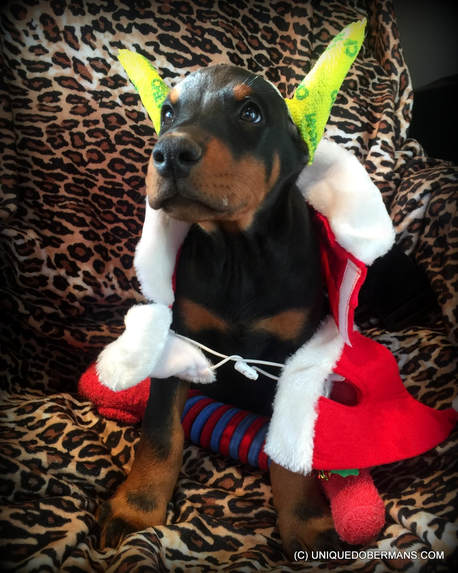 TESTING MILITARY AND POLICE K9 CANDIDATES
IN EACH LITTER WILL USUALLY BE A MILITARY/POLICE TYPE PUPPY NOT FOR SALE TO FAMILY HOMES!
It seems logical that before accepting a dog for police service the candidates instincts and drives should be tested for the qualities and performance we expect to utilize. Of course the vendors/owners have their tests and guarantees but why waste training time and money to return a dog and start over. Included on this page are a couple of other Trainer's tests, many of which I use. But the ultimate testing for me occurs at NIGHT, without equipment, in an area that is new to the dog.
TEST #1
The dog is on a long line 30' attached to a leather collar, walking by a hidden person in an enclosure, a rattle-can makes some noise. The long line is held short, about six feet, until the noise then the line is released and held at the end creating the effect that the dog is free. Does the dog startle, recover, investigate, ignore, scent the person, bark. The can is rolled out after a time, is there any interest. The dog never sees the person, this is an environmental stimulus test. I like to see scenting and interest ignoring could be avoidance. Important: the line must always be loose at the moment of the stimulation so the dog feels free.
TEST #2
This is the big one for me. I have seen Sch3 dogs take off running, luckily they were on a 30' line.
These test are continuous, the dog is walking again held short ready to release. A shiny plastic garbage bag has been attached to some bushes with a 30' long line and as the dog approaches someone shakes the bag. As soon as the bush shakes the dog is released from the short line; hang onto the end of the 30' line, you may be surprised. The dog should startle then recover. Usually there are two of three behaviors acceptable. The dog barks at the bag, maybe moves closer to investigate or the stronger dogs move forward and bite the bag. Some dogs will go into avoidance and not recover, some will not come back to investigate, some will be at the end of the 30' line; not good candidates. Again, some may show no response, pretty dull instincts; not a good candidate.
TEST #3
Continuing on the walk the line is held short again. After some time a person jumps out from behind a bush and pops open and umbrella and the line is released. The dog should startle, recover, and begin to bark. Strong dogs may attack so be careful how much line you allow the dog to have. The umbrella is tossed out to the side, does the dog investigate. The person jumps back into the bush, then starts playing hide and seek from one side of the bush to the other. Does the dog switch from defense to prey, barking at the person. Again, some dogs will avoid behind the handler, may bark but be unwilling to engage; not a good candidate.
TEST #4
Another deal breaker. As you can see, no equipment has been used to stimulate the dog in these tests, and it's dark. Finding a fenced area a person approaches the dog in a threatening aggressive manner. The dog should be barking, showing aggression on a tight line. The persons runs behind the fence, then along the fence away from the dog. The dog is released to pursue the person. The dog should stay with the person running back and forth along the fence, barking at the person, then the person shows some aggression towards the dog through the fence. The dog should remain aggressive towards the person. I have seen dogs be aggressive at the start but when the person was running down the fence they did not pursue; not a good candidate.
These are a few of the tests I perform, I also look for open stairways and slick floors to test the dog nervous system and instincts. ​ 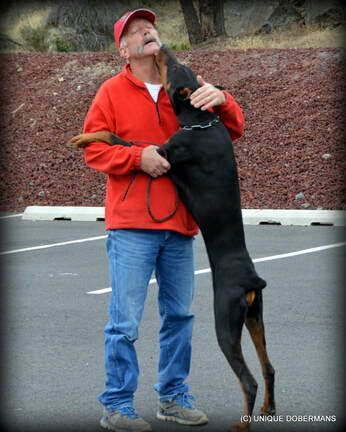