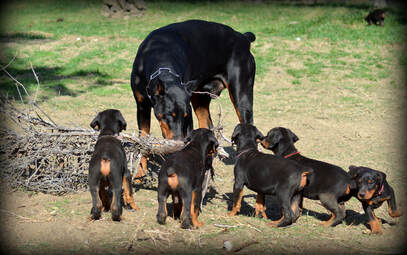 Unique playing with his Doberman puppies. Not many males would be harder in temperament than Unique, yet he loved his puppies.
Same Sex Dog aggression is not truly considered a fault in the Doberman breed, Dobermans are not pack dogs and do not need another dog to "Play with or keep it company", a Unique Dobermans sole purpose in life is to be it's masters constant companion and protector.

Many male Dobermans are male aggressive, just as many female Dobermans can be female dominant.
With the  proper training and early socialization this does not mean that  your Doberman puppy will become dominant, but you should be very aware of it becoming a reality one unsuspecting day.

It is extremely dangerous to take a working bred Doberman such as ours to a dog park or have another dog attack it while on lead, this will most likely cause your Unique Doberman to become "Dog Aggressive" especially while on lead.

Dobermans are not pack dogs and dog aggression is not considered a fault in our breed.
​
Why Two Female Dogs May Not Be the Best Combination Either!
You just visited a local breeder and fell in love with two puppies. They are two adorable female pups that seem to love to play together. You inquired about adopting one, but your heart is split in half between the two. You finally decide that you want both, and the breeder seems quite content to double their profits.
If you find yourself considering this sort of same-sex adoption scenario, think again. As cute and playful same-sex sibling puppies are, chances are that once they mature, they will engage in some serious discussions that could turn bloody.
Thinking that both ladies may work it out together is not a good choice. Very likely, fights may escalate, and one dog may severely injure or kill the other. This seems to happen most often when the two dogs are close in age or when one dog is older and a newer dog is introduced to the pack.
When two females are close in age, there is often a lot of competition. They will fight over several competing elements. Such fights seem to occur the most in the presence of the owner. They may fight over who walks first up a ramp of stairs or through the door, or they may fight over sleeping areas, foods, treats, and toys. Sometimes a cause may not be completely visible in the owner's eyes, but one dog may have felt challenged by the other and felt the need to send her back down the ladder.
Adopting a younger female dog while owning an older female is also high risk. The newer dog may perceive the older dog as weak may try to take over. Unfortunately, such fights may have a sad ending.
However, not all female dogs tend to have such fights. There are cases where owners are able to allow them to peacefully coexist with no problems. A big role is played by the owner, applying a "no fight" policy and intervening if something looks like more than a minor squabble. Through desensitization and counterconditioning, a lot of progress can be achieved.
However, should a fight still disrupt, owners must be very careful in their attempts in separating the two fighting dogs. The chances of 'redirected aggression" are high. In such cases, the fighting dogs will get confused by the fight and over aroused up to a point where they may attack the owner attempting to bring peace back.
It is best therefore, to separate the two by startling them. This is accomplished by tossing a blanket over them, watering them with a hose, making a sudden loud noise or grabbing one dog by the rear legs and pulling away as if the dog was a wheelbarrow. You'll need to be very careful.
While many female dogs do get along peacefully, adopting two puppies of the same sex can sometimes be like playing the Russian roulette, their future may be a question mark. As cute as they may be, please try to consider that in the future one of them may have to be re-homed simply because they do not get along.
​If you are purchasing from a responsible breeder, he or she will not allow you to adopt such combination. If you really must adopt two, a female and a male is a much savvier combination, however ideally consider they should have a few years in between to avoid excessive bonding between each other than with the owner. However, no black and white statements can be made. A lot depends on your level of commitment.
Thinking that dogs "will get over it" and sort things out on their own, is pretty naïve when it comes to raising two female dogs. This may specifically apply the most to certain dogs of certain breeds as some are predisposed to same-sex aggression. Please do your homework seriously and do not take decisions lightly. It may cause you to give up a dog or worse it may cost another dog's life.
Theme by ROOMY THEMES
Theme by ROOMY THEMES