DOBERMAN LITTER BOX
E-MAIL US:
INTRODUCTION TO THE DOBERMAN PINSCHER
There’s an old German saying. “If you can touch my Doberman, you can have him.”

Herr Karl Friedrich Louis Dobermann Dobermann carefully and thoughtfully bred The Doberman to be the perfect protection dog of Man, not of sheep, not to protect cattle or any other creature but to protect Man from Man.
A Doberman is the only breed of dog that can read man better than most humans.
The old myth that Dobermans turn on their owner is because of the temperament and courage that has been bred into the dog.
Train it badly or treat it in a manner that disregards their heritage and dignity and they may turn around and
bite you.

Doberman Colors
Early in the breed the only recognized colors were the common black and tan/rust then in 1901 brown and tan, and blue and tan were added. The fawn and tan Doberman Pinschers, also called Isabella, did not become recognized until 1969. The fawn is the result of a recessive red gene that appears in the red Doberman Pinscher. The white Doberman first appeared in the 1980's. This color results from the specific occurrence of a white gene and is not the result of any recessive genes.
This is not a desirable dog at all as it is considered to be an albino (genetic defect). The dogs have pale blue eyes and are not really white but more of a cream color with light tan markings.
These dogs are very sensitive to bright light and often close their eyes or squint when subjected to it. The white Doberman is not considered a valuable dog by responsible breeders and any responsible breeder would never intentionally breed those traits into a dog.

Are Dobermans ​Vicious?
The Doberman breeds suffered some bad press as being mean and vicious attack dogs back in the 1970's and 80's. Breeders of today however have tried to breed some of the working ability out of today's modern Doberman and have produced a milder softer temperament found to be desirable by most family and pet households. There are many breeders, I myself included have imported European bloodlines back into our American pedigrees which will produce a more "total" Doberman.

The Warlock Doberman
The "Warlock" Dobermans are also known as "Kings" or "Goliath's" and are not really a true Doberman breed.
Their existence stems from a surge in demand for "big bad Dobes" back in the 1970's. It is widely believed that Dobermans were bred with Great Danes and some other large breeds to satisfy the demand.
Today the term Warlock is applied to the poorly bred and over-sized dog which does not conform to the breed's standards. The original "Warlock" was a dog named "Borong the Warlock." Borong was breed in Florida in the mid 1950's by Theodosia and Henry Frampton, he was half German and half American bred Show Dog under 28 inches tall, hardly a giant.

Where did the Doberman come from?
The Doberman Pinscher was developed by a skilled dog breeder by the name of Herr Louis Dobermann in the late 1800's (circa 1890) in the town of Apolda Germany.
Having the dangerous jobs of tax collector and night watchman, Herr Dobermann set out to develop a medium to large sized working dog that he could train and would have the ability to protect him while he performed his duties throughout the day.

Experts agree that the Doberman Pinscher is a descendant of the following dog breeds:

German Pinscher
Used as a hunter of rats in Germany. This pinscher only grows to approximately 17 to 21 inches tall and weighs in the neighborhood of 30 to 40 pounds.

The Great Dane
A large breed of dog that is friendly, intelligent, courageous and strong. This breed of dog can weigh between 120 and 175 pounds. Males stand 34 inches at the shoulder and females around 30 inches. The Great Dane has a short dense coat which may be brown, black, tan, blue or white with black patches.The Great Dane was developed during the 1500's in Germany and was used as a guard dog and for hunting wild boars.

Manchester Terrierrs
A smaller breed of dog weighing in at 12 to 22 pounds. Manchester Terriers have a whiplike tail, and a smooth black coat. These terriers have tan markings on each cheek, over each eye, on the chest, on the inside of the hind legs and on front of the forelegs.

Thuringian Shepherds
The Manchester Terrier was developed in Manchester England in the 1800's for the purpose of competing in rat killing matches.
Today the Manchester Terrier is a loyal, intelligent, extremely effective watchdog and make great pets.
German Shorthair Hair PointerA breed of dog used primarily to hunt game birds. It weighs in at approximately 45 to 70 pounds and stands about 20 to 25 inches at the shoulder.

Black Greyhound
for elegance and sleekness

Although the exact dog breed combinations used to develop the Doberman Pinscher are unknown and Herr Dobermann did not keep any breeding records, historians claim it did not take very long before Dobermann was successful with his breeding attempts.
LITTER-BOX
DOBERMAN PUPPIES FOR SALE $3500.00​
CONTACT US HERE

WHY BUY A UNIQUE DOBERMAN FOR SALE? 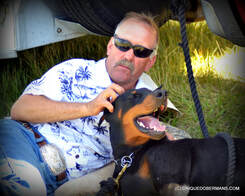 Unique Dobermans
A Chance meeting, a twist of Fate and a new found loyal and Very Unique friend who was needing a new Country.... is how Unique Dobermans began.
From the finest German Doberman breeding foundation, on to the Croatian's IDC World Champion Titled Diploma Winner Best of Island Doberman kennel, shown and trained to the top International and World Titled Show Conformation Dobermans to the Top IPO IGP VPG FR and SCHH titled Dobermans ... The Doberman Male "Unique Best of Island" was also trained to the IPO1 level and was a formidable Personal Protection Estate Guard Dog. Unique had found the love of his one true master and he live'd the life of a Champion Doberman King fitting of his Royal heritage.
​READ MORE ON HARD DOMINATE DOBERMANS HERE

​We have been Doberman owners or more accurately we've been owned by a Doberman since 1973.
​After retiring from the cattle and horse industry we've enjoyed breeding a few select litters of German, Russian and European Dobermans.
It brings us great pleasure knowing one of our precious babies is doing the job for which he was intended... providing you and your family the safest and most effective protection and security available on 4 legs as well as bringing laughter and joy into your home.
Unique Dobermans is a name recognized around the world as one of the most trusted and reputable Doberman Pinscher breeders in America.
Unique Dobermans has been a trusted source of Doberman Pinscher puppies for sale since the 1980's.
Lifetime Satisfaction Guarantee per contract terms ~ Backed by High Breeding Standards
Quality World Champion Dobermans - Find the Doberman Puppy of Your Dreams Today
Unique Doberman puppies come with a Health Guarantee
Experienced World Wide Shippers

"The Doberman does not fear, does not retreat, be it human or animal.
​He accompanies his Lord through fire and water - if he is lucky, his master will do the same for him"
​
Unique Doberman Pinscher Puppies for sale are known around the world as one of the most effective guard dogs for your families protection and companionship available today.
Our large boned Doberman Pinscher puppies for sale are thoughtfully bred from Healthy and Long Lived Champion Imported Show and Working line European, Russian and German Dobermans, yes it's possible to have Beauty and Brawn in the same Doberman Puppy.
DUE TO THE GOVERNMENT LOCK-DOWN YOU MUST BE WILLING AND ABLE TO DRIVE OR FLY TO COLORADO TO PICK UP YOUR DOBERMAN PUPPY 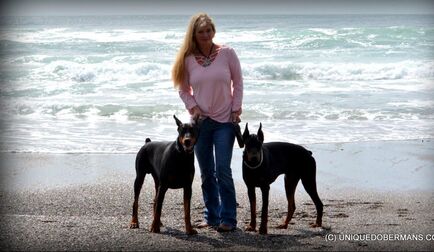 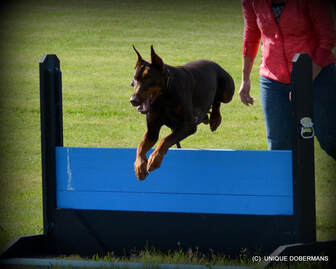 Every Doberman puppy for sale at Unique Dobermans has been thoughtfully and carefully planned and considered long before the breeding has taken place. Your new Unique Doberman puppy (if you are so lucky to be chosen as one of our elite Doberman puppy owners) comes with a pedigree sporting German, Russian and European Dobermans full of world champion show dogs plus each one has been worked to at least a BH in Schutzhund, IPO, IGP, Family Personal Protection dogs, Therapy dogs, French Ring sports and competitions.

What do all of these Doberman working titles and Doberman show titles actually mean to you as a "pet owner" that doesn't plan on showing or titling your Doberman puppy? EVERYTHING! Your new Doberman Puppy's parents have passed strict temperament testing, tracking trials to test their nose and scent capabilities and personal protection courage testing of their character and most importantly their nerves.

The genetics behind your Unique Doberman puppy shows that his genes are free of hip dysplasia, eye diseases, bad temperament and poor conformation.
A Doberman dog that cannot hold up to the extreme athleticism that is required to obtain working titles is a poorly conformed dog and will break down, a Doberman dog that is not readily and willing to immediately obey with a strong desire to please it's master is not a pleasant Doberman to live with inside the home and certainly will never be able to obtain these working titles.
​
If you have been looking for the best Doberman Family Guard Dogs, with a World Champion pedigree, Schutzhund, IPO, IGP, VPG and ZTP Working Titles in Personal Protection, Tracking, Obedience and Agility with Beauty and Brawn to match then give us a call, text, email or Facebook message.
Theme by ROOMY THEMES
Theme by ROOMY THEMES